Current listed Australian company Corizon Limited (ASX: CIZ) intends to change its name to eMetals Limited and re-list to the ASX under code EMT, subject to the completion of an acquisition agreement to acquire 100% interest in RWG Minerals. RWG owns three exploration projects in Western Australia; Twin Hills in the Eastern Goldfields region prospective for gold mineralisation, Nardoo Well in the Gascoyne region prospective for tungsten and lithium and Cookes Creek in the east Pilbara prospective for tungsten.

This page contains IPO information based on the Prospectus dated 5 November 2019. Link for the Prospectus: https://www.corizonlimited.com.au/

(Disclaimer: The above key dates are for references only. They are subject to change by the company at any time. You shall not rely on this information for any investment decisions. For any changes, you shall refer to the company’s official website or the latest version of the Prospectus. While reasonable efforts are made to update the information, we make no warranty about the accuracy, completeness, reliability or timeliness of the information.) 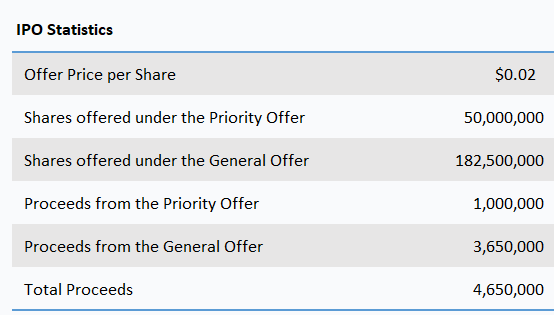 Details of The Offer

The offers are not underwritten. 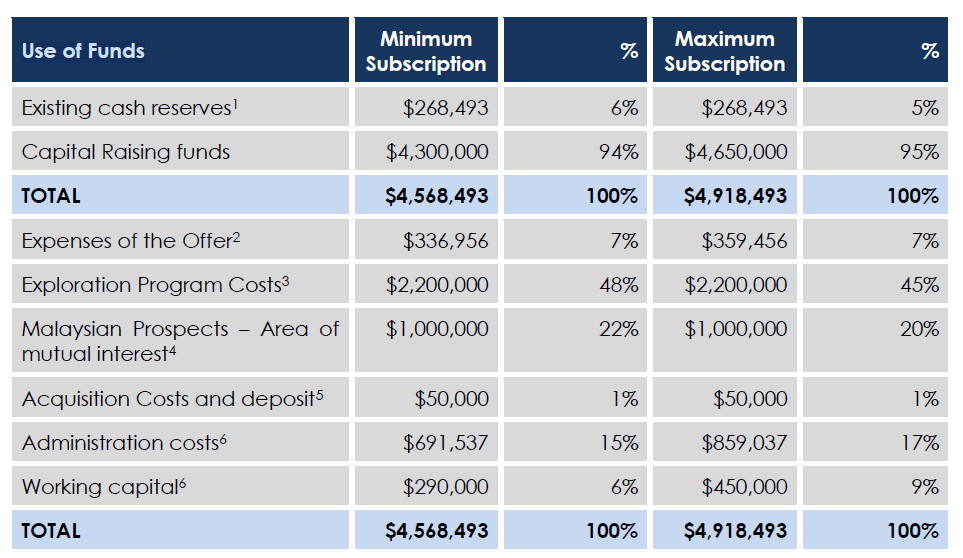 About Corizon and The Acquisition

Corizon Limited (ASX: CIZ) is an Australian company, incorporated on 4 March 2010 and admitted to the Official List of the ASX on 26 October 2010. Since incorporation, the Company has focused its activities on mineral resource exploration and mining. Recently, the Company has been seeking out project opportunities with a view to enhancing Shareholder value.

On 27 March 2018, the Company announced that it had entered into an agreement to acquire 100% of the issued capital in RWG Minerals Pty Ltd held by GWR Group Limited (ASX: GWR).

The material terms of the Acquisition Agreement are as follows:

About RWG Minerals and Project Summary 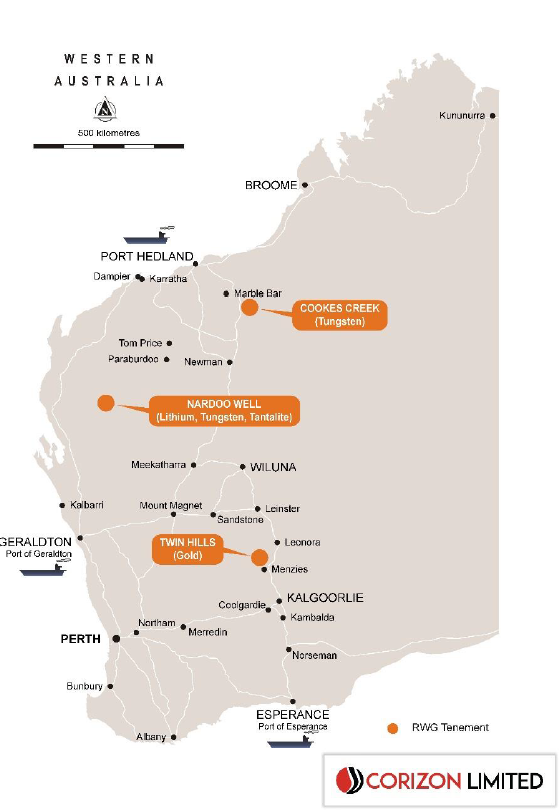 (The location of the Projects)

Nardoo Well is a single granted exploration licence (E09/2114) located about 250km east of Carnarvon in the Gascoyne region of Western Australia and covers an area of 131km. Access is gained via the sealed Carnarvon- Mullewa road to the east of Gascoyne Junction and then 90km north on local gravel roads. The tenement area is prospective for tungsten and lithium.

Corizon intends that it will spend most of its exploration on drilling supported by further geochemical surveys and surface mapping. Corizon proposes to target the 8.5km strike length of the Thirty-Three Supersuite and the skarns identified by Mincor. Prospective areas will be followed up by RC drilling and diamond drilling to test for bedrock mineralisation. Diamond drilling may be selected over reverse circulation drilling to gain a more accurate representation of the tungsten mineralisation. 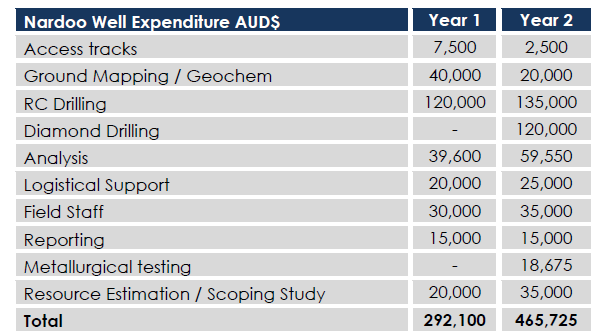 Twin Hills consists of a granted exploration licence (E29/950) located about 30km north east of Menzies and 150km north of Kalgoorlie in the Eastern Goldfields of Western Australia. The tenement covers an area of approximately 30km2 and extends over about 10km of strike of the greenstone sequence that hosts the excised historical Twin Hills gold mine. The tenement covers the north and south extension of the high-grade Twin Hills gold mine.

Corizon intends to complete a detailed magnetics survey over the Twin Hills gold project with the intent to identify the potential structures that could control the potential gold mineralisation. Structural targets will be tested using RAB/AC/RC drilling and diamond drilling. 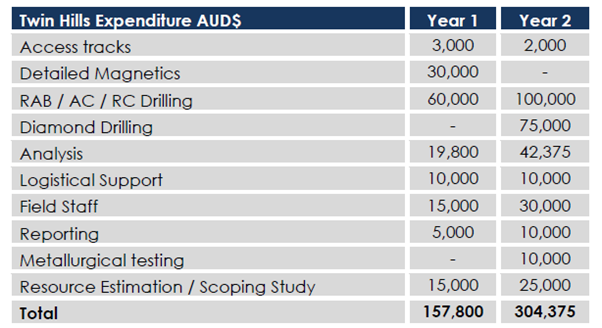 The Cookes Creek area is made up of two granted exploration licenses (E46/1095 and E46/1163) about 85km south east of Marble Bar in the East Pilbara of Western Australia that cover an area of 51km2. The tenement area contains a number of recorded tungsten, molybdenum and base metal occurrences and adjoins Tungsten Mining NL’s (ASX: TGN) Big Hill Project.

Corizon intends to initiate exploration by completing detailed surface mapping of historical workings to understand the structural setting and potential for further mineralisation along strike. This is likely to be carried out in conjunction with a broader focused geochemical soil sampling program to help identify any additional areas of potential economic mineralisation over the tenement area. Anomalous areas will be followed up and tested with RC drilling and diamond drilling which will be the majority of the exploration budget. 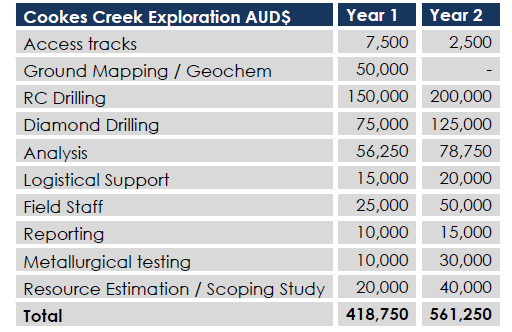 The Company has also entered into the Acquisition of Prospects Agreement with Gecko Metals Sdn Bhd, an entity incorporated and operating under the laws of Malaysia. The Acquisition of Prospects Agreement records the parties’ intention to develop a commercial relationship for their mutual benefit and provides the terms and conditions upon which they will work together to identify and evaluate mineral interests in and around the regions of Kelantan, northeast of Peninsular Malaysia, Perak, northwest of Peninsular Malaysia and Terengganu, Malaysia.

The primary objective of the Company has been to focus on mineral exploration of resource opportunities that have the potential to deliver growth for Shareholders. In order to achieve this objective following listing, the Company proposes to undertake the exploration programs highlighted above. The results of the exploration programs will determine the economic viability and possible timing for the commencement of further testing including pre-feasibility studies and commencement of other mining operations.

In addition to its existing exploration activities, the Company will continue to pursue other acquisitions that have a strategic fit for the Company. In summary, the Company’s management strategy and purpose of this Offer is to provide it with funding to: 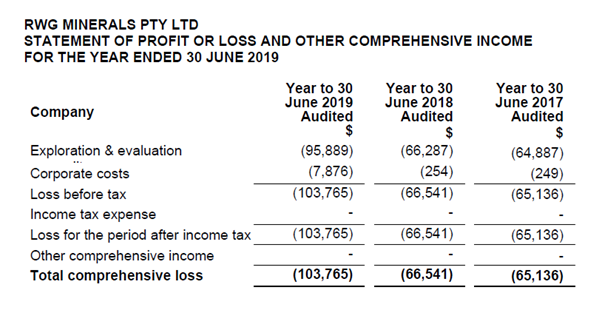 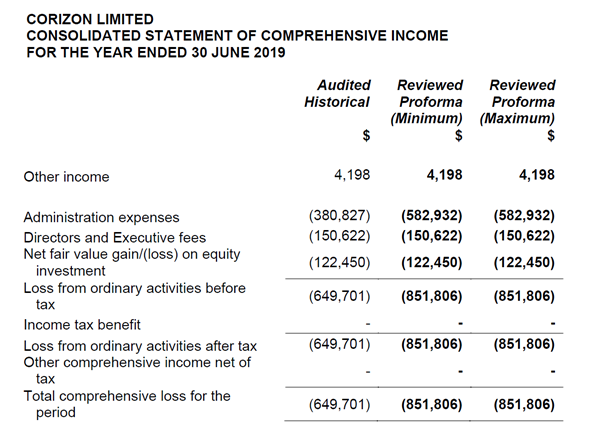 Those Shareholders holding 5% or more of the Shares on issue both as at the date of this Prospectus and on completion of the Offer (assuming full subscription) are set out in the respective tables below.

As at the date of the Prospectus

Mr Walker has extensive experience in public company management and in the provision of corporate advice. Specialising in the natural resources sector, Mr Walker has served as Executive Chairman orManaging Director for public companies with mineral interests in NorthAmerica, South America, Africa, Eastern Europe, Australia, and Asia. Currently, he serves as Chairman of Blue River Mining Limited. He is alsoChairman of corporate advisory firm Cicero Corporate Services based in London, UK. During the last three years, Mr Walker has served as a director of the following listed companies: Intiger Group Limited (appointed 1 August 2014) and Yojee Limited (appointed 30 June 2016).

Mr Wong has considerable international business experience having worked in Hong Kong, the United Kingdom and now in Malaysia and Indonesia after graduating with a Bachelor of Business degree from Swinburne University (Melbourne). Mr Wong is involved with the mining industry in China, Indonesia, and Malaysia. He was previously involved in sales & exports of steel-related products and was a director of a retail chain business in the United Kingdom. Mr Wong was working in the OEM plastic manufacturing industry in Hong Kong prior to taking up a position in the steel industry in Malaysia. He is currently a director at Golden West Resources Ltd.

Mr Lyons is a successful and well respected Perth based businessman and has been a shareholder and Managing Director of the Heiniger GroupsAustralasian operations for the last 25 years. During the last three years, Mr Lyons has served as a director of the following listed companies: GWRGroup Limited (appointed 2 June 2010) and Tungsten Mining Limited(appointed 16 July 2014).

ASX Codes, Offer Opening and Closing Dates are proposed only and are subject to change without notice.

The IPO information on the website provided by 61 Financial only serves general information purposes, it does not constitute financial product advice. All IPO information is retrieved from the Company’s Prospectus. They are subject to change at any time without notice. Investors shall refer to the Prospectus for detailed information.